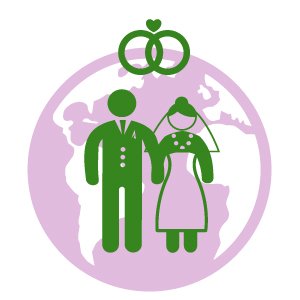 Marriages between Italians and foreigners contracted abroad have immediate validity and relevance in the Italian juridical system. According to national laws, they must be transcribed in the Registers of Civil Status of the Italian Municipality of interest (Office of transcription of weddings celebrated abroad). At least one of the spouses must be an Italian citizen and reside in the Municipality where the transcription must be registered. Transcription of the act of marriage has certification and publicity purposes. Same-sex marriages or civil unions celebrated abroad, can be registered in the Registers of Civil Unions established in each Municipality according to Royal Decree July 9, 1939, no. 1238, as subsequently amended.

If you have a multilingual marriage certificate, or a marriage certificate with its legalization/translation/Apostille, that you would like to transcribe into the Italian Registers of Civil Status, we can request its transcription for you!
Just send an email to assistance@vademecumitalia.com. We will then ask you for the few documents we need in order to submit the request to the municipality (“Comune”) of interest. After we receive your documents, our lawyer will present the request at the municipality right away and, therefore, your marriage should be officially transcribed in the Registers of the municipality of interest within thirty days.
Very simple, efficient, and at a low cost!!

Under the following provisions, it is possible to transcribe marriages celebrated abroad in the Italian Registers of Civil Status.

According to national laws, as subsequently confirmed by the Italian Supreme Court, marriages between Italians and foreigners contracted abroad have immediate validity and relevance in the Italian juridical system.

As a matter of fact, pursuant to Presidential Decree dated November 3, 2000, no. 396, art. 16 (D.p.r. 396/2000) marriages between two Italian citizens or between an Italian citizen and a foreigner, can be celebrated abroad before the competent diplomatic or consular authority or before the local authority according to domestic laws.

In compliance with art. 63, par.2 , lett. c) of the aforementioned Presidential Decree, marriages celebrated abroad must be transcribed in the Registers of Civil Status of the Italian Municipality of interest (Rome, Milan, Florence, Turin, Palermo, etc.).

Pursuant to D.p.r. 396/2000, art. 12, par. 11, individuals who are entitled to request the transcription by the competent Office of Civil Status of the Municipality (of interest) – Office of transcription of weddings celebrated abroad (Stato Civile del Comune – Ufficio trascrizione matrimoni esteri) are:

anyone who has an interest;

the diplomatic or consular authorities.

At least one of the spouses must be an Italian citizen and reside in the Municipality or be registered in the “Anagrafe
degli Italiani Residenti all’Estero – AIRE” (Registry of Italians Resident Abroad) of the Municipality where the transcription must be performed.

Documents to be submitted (generally) are:

If the act was drawn up in a country party to the Hague Convention dated October 5, 1961, notarization/legalization is not required but the act must carry the stamp “Apostille”, which can be requested by the interested party from the competent internal authority designated by each State, which is usually the Ministry of Foreign Affairs. When the “Apostille” is affixed to the certificate this can be regularly recognized in Italy.n2

If the marriage has been celebrated in a State party to the Vienna Convention dated September 8, 1976, the act of marriage can be drawn-up on the international multilingual form. In this case, no translation nor notarization/legalization are required.n3

Request for transcription by the applicant which must be addressed to the Mayor of the Municipality of interest, to which a € 16 stamp duty must be attached.

Copy of the identity document of the applicant.

Having verified that, with reference to the Italian Law, all conditions and requirements have been met and there is no impediment (minor age of the spouses, prior marriages, etc.), all documents submitted are complete and correct, the competent official will transcribe the marriage contracted abroad into the Register of Civil Status and perform the consequent fulfillment, after which it will be possible to obtain the certificate of marriage.

Alternatively to the above-mentioned procedure, the interested party/ies can ask the Italian Consulate  to provide assistance in the transcription of the act of marriage. In this case, the applicant must provide the Italian Consulate with the original of the certificate of marriage issued by the Office of Civil Status of the foreign country where the wedding took place, officially translated (the Consulate should translate the act for the applicant, if needed), together with a copy of his identity document. The Consulate, after verifying that the marriage is valid according to the law of the State of celebration, that every formality has been completed (i.e. notarization/legalization if required, documents, etc), will then send all acts and documents to the competent Municipality where the applicant resides or intends to reside for the transcription of the act of marriage into the Italian Register of Civil Status.

It is important to understand that the formality of transcription is intended to make public that the citizen in question has contracted a marriage abroad that is considered valid by the foreign local authority, and therefore also by the Italian authority in compliance with the above. Therefore, the lack of transcription of the act of marriage does not affect the principle of immediate validity of a marriage celebrated abroad in the Italian system. Transcription has in fact certification and publicity purposes of an act which is in itself already valid (Cass. Civ. Sect. VI, July 18, 2013, no. 17620).n4

The only limit to the transcription of an act of marriage contracted abroad is the required compliance with public policy. As a matter of fact, art. 18 of D.p.r. 396 /2000, establishes that acts drawn up abroad cannot be transcribed in Italy if they are contrary to public policy.

If you need assistance in contacting the Municipality that you are interest in, filling out the form of request for transcription, or proposing appeal in compliance with art. 95 of D.p.r. 396/2000, you can send an email to assistance@vademecumitalia.com or fill in the Contact us form.

In Italy the recognition of same-sex marriages has been an important and controversial social and political issue in the past years, which to date has found its first regulatory solution with Law 20 May, 2016, no. 76 (“Regolamentazione delle unioni civili tra persone dello stesso sesso e disciplina delle convivenze“) better known as “Legge sulle unioni civili” (Law on civil unions) or “Legge Cirinnà” (Cirinnà Law). Technically, this law, that entered into force on June 5, 2016, refers to and regulates same-sex “civil unions” but not same-sex “marriages”.n5

As a consequence of the aforementioned decrees, same-sex marriages, or civil unions, “celebrated” abroad will produce the same effects of a civil union “celebrated” in Italy (Law 218/1995, art. 32-bis and 32-quinquies, as amended by Legislative Decree January 19, 2017, no. 7).

Moreover, under art. 134-bis, paragraph 3, letter a) of Royal Decree July 9, 1939, no. 1238 (as amended by Legislative Decree 5/2017) civil unions and marriages between persons of the same sex “celebrated” abroad must be transcribed in the second part of the Register of Civil Unions (established by art. 14 of the aforementioned Royal Decree no. 1238/1939).n6

The interested party can request the transcription of the certificate of marriage into the Register of Civil Unions of the Italian municipality of interest (Rome, Milan, Florence, Turin, Palermo, etc.), through the Italian diplomatic authority located in the country where the marriage was celebrated. Otherwise, the transcription can be requested in person at the competent office of the Central Registry (Anagrafe Centrale) of the municipality of interest. The certificate of marriage must be officially translated and authenticated according to applicable legislation and international conventions.

n1 Art. 65 of the same law establishes that in Italy the provisions of foreign countries related to the capacity of people, as well as the existence of a family relationship, or personality rights, are considered effective when they are pronounced by the authorities of the State whose law is invoked by the provisions of this Law (Law 218/1995), or have effect within that State, even if pronounced by authorities of another State, provided they are not contrary to public policy and the essential rights of defense have been met.
n2 The following countries are part of the Hague Convention: Albania, Andorra, Antigua and Barbuda, Argentina, Armenia, Australia, Austria, Azerbaijan, Bahamas, Barbados, Belarus, Belgium, Belize, Bosnia and Herzegovina, Botswana, Brasil, Brunei-Darussalam, Bulgaria, Cape Verde, China (Hong Kong), China (Macao), Cyprus, Colombia, Costa Rica, Croatia, South Korea, Denmark, Dominica, Ecuador, El Salvador, Estonia, Russia, Fiji, Finland, France, Georgia, Germany, Japan, Great Britain, Greece, Grenada, Honduras, India, Ireland, Iceland, Cook Islands, Marshall Islands, Israel, Italy, Kazakhstan, Kyrgyzstan, Lesotho, Latvia, Liberia, Liechtenstein, Lithuania, Luxembourg, Macedonia, Malawi, Malta, Mauritius, Mexico, Moldova, Monaco, Mongolia, Montenegro, Namibia, New Zealand, Niue, Norway, Oman, Panama, the Netherlands, Peru, Poland, Portugal, Czech Republic, Dominican Republic, Romania, Saint Kitts and Nevis, Saint Lucia, Saint Vincent and the Grenadines, Samoa, San Marino Sao Tome and Principe, Serbia, Seychelles, Slovakia, Slovenia, Spain, South Africa, Suriname, Sweden, Switzerland, Swaziland, Tonga, Trinidad and Tobago, Turkey, Ukraine, Hungary, USA, Vanuatu, Venezuela.
n3 The following countries are part of the Vienna Convention: Austria, Belgium, Bosnia-Herzegovina, Croatia, Estonia, France, Germany, Italy, Lithuania, Luxembourg, Macedonia, Moldova, Montenegro, Netherlands, Poland, Portugal, Serbia, Slovenia, Spain, Switzerland and Turkey. Please note that the Vienna Convention cannot currently be applied to Greece, which, although is a signatory of the Convention, has not yet ratified it.
n4 In fact, a marriage celebrated by an Italian citizen abroad in accordance with the domestic laws of the foreign State, may be declared null and void only through the action of nullity under article 117 of the Italian Civil Code (c.c.), in case of violation of art. 84 (age limits), 86 (binding prior marriage), 87 (individuals related by kinship, affinity, adoption) and 88 (individuals convicted of murder or attempted murder of one’s spouse) of the c.c.. Moreover, the marriage can be appealed in cases of interdiction for mental infirmity (art. 119 c.c.), lack of mental capacity (art. 120 c.c.), violence and error (art. 122 c.c.), or simulation (art. 123 c.c.).
n5With reference to the transcription of same-sex marriages (or civil unions) celebrated abroad in the Italian registers of Civil Status, under article 1, paragraph 28, of Law 76/2016, the Government has been delegated to adopt, within six months from the date of entry into force of the Law (June 5, 2016), one or more legislative decrees on same-sex civil unions in order to adapt (to the provisions of Law 76/2016) the Order of Civil Status in matters of registrations, transcriptions, and annotations. Subsequently, Legislative Decrees January 19, 2017, no. 5, 6, and 7 were issued.
n6Legislative Decree January 19, 2017, no. 5, has amended art. 14 of Royal Decree July 9, 1939, no. 1238, by inserting a Register of Civil Unions into the list of Civil Registers (citizenship, birth, marriage, and death) that must be kept in each registrar office. However, some Italian municipalities may still have a “Temporary Register” established by DPCM no.144.