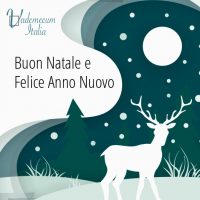 Italy may be a small country but it’s big on traditions. Although the country has only been united since 1861 and customs vary from North to South, two common threads tie the traditions together throughout the country: family and the Catholic church. (0ver 70% of Italians declare themselves Catholic, while there is a growing Orthodox community of 1.7 million and ca.700,000 Protestants.)

Christmas is the biggest family holiday of the year. Italians even have a saying that goes something like this:
Christmas with your family
Easter with whoever you like!

Of course, when Italian families get together they do so around a table with lots of food and wine! By Catholic tradition, Christmas Eve dinner should be ‘magro’ meaning ‘lean’, with no meat, and many families, especially in Central and Southern regions, plan their menu accordingly, but in any case the meal is rich in courses. Families that don’t eat meat on Christmas Eve may start off with scallops, shrimp, and squid salad followed by baked pasta with codfish and then seabass. Side dishes of seasonal vegetables grace the table along with bread and cheese. Desserts also vary from region to region but nowadays the Lumbardy ‘Panettone’ is king. This popular Christmas cake is filled with raisins and candied fruit or chocolate chips, though many prefer the golden ‘Pandoro’ from Verona which is lighter–ok, lighter than Pandolce Genovese, Southern Italian fried sweets coated in honey or the superb Sicilian Cassata! All sorrows (for money spent on food and gifts) are drowned in chalices of wine before the devout march off to midnight mass.

At the end of mass, Baby Jesus is laid in His cradle in the ‘Presepe’ or Nativity scene. The tradition was started some 800 years ago by Saint Francis of Assisi and still today numerous churches and families construct elaborate manger scenes surrounded by mechanical figurines that recreate medieval villages and landscapes. These fascinating Nativity scenes are the most Italian of all Christmas decorations and Naples is undeniably the capital of this folk art.

Although in the post WW II era Northern European and American traditions like Christmas trees and English carols, Santa Claus and frenetic  Christmas shopping invaded Italy, Baby Jesus remains the traditional gift-bringer in devout families. Children await anxiously for midnight when Baby Jesus ‘is born’ and put in His cradle, signalling the time for gift-giving or for the arrival of Santa Claus with his presents. The festivities carry on into the wee hours of the morning with families playing ‘Tombola’, a sort of Bingo, eating more ‘Panettone’ and drinking something to keep their spirits bright.

If you think that is the end of celebrations, well, think again! Some brave souls (often grandmothers) get up early enough to prepare Christmas dinner while others sleep in late or go to church. This meal begins with starters of salame, potato salad, vegetable, quiches, sliced veal in tuna sauce, olives or whatever else the family loves to eat. The quintessential pasta course follows, which is usually agnolotti (ravioli) in the North and lasagna or other baked pasta casseroles in the rest of the country.  Roasted beef, veal or lamb comes next with vegetables, bread and cheese and rivers of wine which meander throughout the courses. More ‘Panettone ‘ or regional desserts round out the meal before some stuffed Italians crash out on their sofas. The more energetic get out the Tombola board again or play cards, eat chocolate and ‘torrone’ (candy made from egg whites, sugar and almonds) and spend the afternoon in general ‘bonhomie.’

And the festivities go on! The 26th, the Feast  of Stephen or  Boxing Day, is a national holiday in Italy. Many families, especially in the North, head off for the Alps and skiing holidays, while others go to balmier, seaside localities. In Rome and places farther south, families meet again for another round of big dinners. Then tummies get to rest, so to speak, for a few days before New Year’s celebrations kick in. Tired of cooking–but not eating–many opt for evenings at a restaurant where ‘tortellini ‘ from Parma are served in beef broth and then the meat is accompanied by various sweet or spicy sauces.

Finally the last seasonal holiday arrives: Epiphany or Twelfth Night  when children hang up their stockings, waiting for the arrival of an old, witchy-looking woman called the ‘Befana’ who flies around on a broomstick. She fills the stockings with candy and toys but children must be good all year long or they’ll only get black (candy) coal! Many towns have charming traditions linked to this unique Italian custom. After another dinner on the 6th of January, the Befana sweeps away all of the holidays with her broom and on the next day it’s back to school and work for all fun-loving Italians!

RT @BillGates: There’s no question the United States missed the opportunity to get ahead of the novel #coronavirus. But the window for maki…
h J R
@vademecumitalia